Global Carbon Emissions Rise to 37.1 Gigatons, Here Is What We Can Do 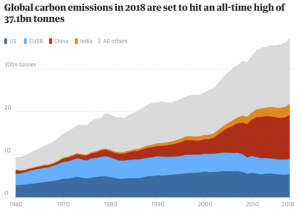 Global emissions alarms are sounding as we close out 2018. In a new report by the UN Global Carbon Project, worldwide carbon emissions, primarily driven by fossil fuels, will reach an all-time high of 31.7 gigatons in 2018. That is an increase of 2.7% from last year and sharply up from 2017 small increase and a plateau with 0% growth from 2014-2016.

The Global Carbon Project report states that the major driver of the 2018 increase was higher electricity demand worldwide, leading to more coal-burning – primarily by China and India as their economies grew and more oil used in transport. Emissions in China were up 4.7% and India by 6.3% year on year. However, almost all countries are contributing to the accelerating emission rates.

There are approximately 62,000 power plants in the world today according to the U.S. Energy Information Administration, the vast majority of which still burn fossil fuels like coal, petroleum, natural gas, or other materials to produce electric power.

The United States contributed a 2.5% increase to 2018 carbon emissions.

About 63% of U.S. net electricity generation comes from fossil fuels, with coal accounting for about 30% overall (and falling). While coal consumption in the U.S. is declining rapidly, worldwide coal use is experiencing what some have called a “renaissance”.

The result of this ‘rebirth’ is predicted to be a 2.7 degree Fahrenheit warming of Earth by 2040 at the current pace in  models from the Intergovernmental Panel on Climate Change, a United Nations scientific group. If humans continue to accelerate beyond 37.1 gigatonnes of carbon emissions per year, the timeline to reach that temperature would move ever-closer to 2030.

So, What Can We Do? Read the rest of the full article here.